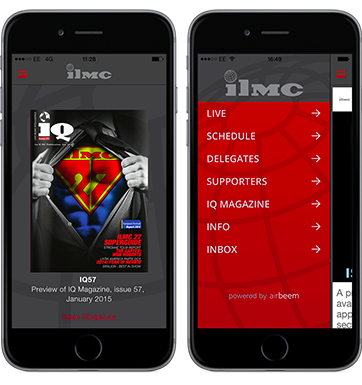 ILMC’s mobile app partners, Airbeem, are kindly donating a custom mobile app for your event or artist worth up to a whopping £20,000 (€27,400), to one lucky ILMC delegate during the conference.    To be in with a chance of winning, swing (or fly) by their stand in Pollstar’s Tech Laboratory on the mezzanine floor of the hotel, say hello, and drop off a business card.

Airbeem are the supreme force behind this year’s ILMC app, which contains a full conference schedule, speaker pictures and biogs, and social streams around the conference. It’s the virtual gadget that no self-respecting crime-fighter should be without… if you haven’t got it already, click on the relevant button below.

There’s a late addition to ILMC’s Saturday night schedule, but a welcome change that promises some fantastic new music. The ITB Showcase will now take place at the Notting Hill Arts Club between 17:00 and 21:30. Just a short hop from the Royal Garden Hotel, our friends will be hosting some of the finest new recruits on their agency roster.

There’s no need to book, just turn up with your ILMC delegate pass to gain entry and enjoy a complimentary beverage or three. A fine way to spend a Saturday night, if ever there was one…

The last few spots remain for ILMC’s annual football showdown between the UK and the Rest of the World. Always a match of epic proportions, the Match of the Year between giants of the live music industry sees 22 players take part, and almost all of them survive for the bar afterwards…

The match takes place on Saturday 7 March at 19:30, with coaches whisking players from the Royal Garden Hotel to the pitch in Battersea, and back again. To book a place, or find out more, please contact [email protected].

Rocketing into the 21st Century, ILMC has partnered with mobile whizz-kids Airbeem to launch a mobile app for this year’s conference. An indispensable guide to ILMC 27, delegates will be able to build a personalised conference schedule; browse comprehensive speaker biogs, photos and details; get an up-to-the-minute schedule of events; and view the latest social media streams around ILMC.

To download the app, search for ‘International Live Music Conference’ on either the Apple App Store or Google Play. Or hit the relevant button below…